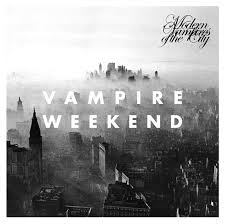 We recently opened our Scholar meeting by answering the question “What fills your spirit?” Being the indecisive and long-winded person that I am, I decided to present my fellow scholars with my own litany of spirit fillers which in includes (but is not limited to) church, writing, English Renaissance literature, going on walks, singing in large groups, drawing pictures of pink fluffy unicorns, and listening to music.

Given that June will soon spring upon us, like a Greek grandmother on a cup of communion, I’m about to fill my mouth, ears, and spirit with song because it’s…. wait for it… THE SUMMER CONCERT SEASON! And this year, I’ll be starting off my annual concert binge with Vampire Weekend in early June, followed by Jack White in July, and concluding with Chicago’s Riot Fest (with some other names in between).

But Thano, how can you—a practicing Orthodox Christian—submit yourself to the Devil’s melodies on one day and go to church in good conscience the next day? Well old crotchety 1950’s man, let me tell you a little somethin’-somethin.’

It’s definitely challenging to be Orthodox and a lover of modern music. I’ll be blunt: there’s a lot of stuff out there that I consider garbage—garbage I sometimes listen to—but garbage nonetheless. There’s art that’s uncreative, there’s art that doesn’t challenge you, there’s, there’s art that’s totally shallow, there’s art that purely seeks to antagonize certain audiences, and I really feel that a lot of that stuff doesn’t really do anything good for listeners.

But at the same time, there are songs that are critical of certain religious beliefs that I really appreciate. Take, for example, a couple of my favorite tracks from the latest Vampire Weekend album: “Unbelievers and “Ya Hey.” Both of these songs depict their speaker’s inability to connect to the divine and the Judeo-Christian concept of God.

“I’m not excited [about God], but should I be?Is this the fate that half of the world has planned for me?I know I love you,
and you love the sea,
but what holy water contains a little drop, little drop for me?”

It refers to the lack of nourishment that the speaker receives from the religious culture that surrounds him.

“Ya Hey” uses a few biblical allusions to describe an inability to connect with God, while background vocals continuously repeat the song’s title (a pun on Yeweh):

“Through the fire and through the flamesYou won’t even say your name,only “I am that I am.

But who could ever live that way?”

So, both of these songs depict a struggle with spirituality, and though I’m probably on the other side of this struggle than the band’s songwriter Ezra Koenig, I can definitely relate to the difficulties of experiencing faith that Ezra Koenig sings about. Do I ever feel like religion isn’t doing anything for me? Do I ever feel like God is distant? Of course I do! Going to shows like these is one of my favorite examples of inter-faith in action: People who believe different things, but still use music to confront similar struggles of belief.

So let’s get back to spirit-filling. How does acknowledging my struggles—and thereby confronting my own moments of spiritual emptiness—fill my spirit? Is it filled from watching some of my favorite musicians dancing and enjoying themselves on stage? Is it filled from the sound of a stadium full of people singing along to my favorite song? Is it filled by the misty sensation of a cup of Miller Light raining down over my head as it flies further up towards the stage? Not quite to any of these, but I actually do enjoy getting the occasional beer shower.

When I confront really challenging songs or poetry, the filling of my spirit comes from knowing that if I do “fall down” from maintaining my relationship with God, I have the opportunity to “get back up” and continue dealing with my struggles. Here’s a better articulation of that comforting thought from the Orthodox theologian Jim Forrest’s book Confession: Doorway to Forgiveness:

The story is called “A Fallen Monk Seeks Advice From St. Sisoes the Great”

A young monk said to Abba Sisoes: “Abba, what should I do? I fell.” The elder answered: “Get up!” The monk said: “I got up and I fell again!” The elder replied: “Get up again!” But the young monk asked: “For how long should I get up when I fall?” “Until your death,” answered Abba Sisoes. “For a man heads to his judgment either fallen or getting back up again.”

And who knows, maybe one day there will be a Vampire Weekend song about that.